After breakfast I contacted Virgin Atlantic and upgraded my return flight to Premium Economy for $1589, although I was subsequently only billed for $1200 (??). I don’t think I could face another long duration (more than 6 hrs) flight in economy.

Took tube to Waterloo and checked out station – another very big and busy terminal. I will be traveling out of here on Monday instead of from Paddington on the May Day public holiday (or ‘bank holiday’ as they call it here) due to trackwork. Got back onto the tube to Lambeth, the next station, to go to the Imperial War Museum (IWM). 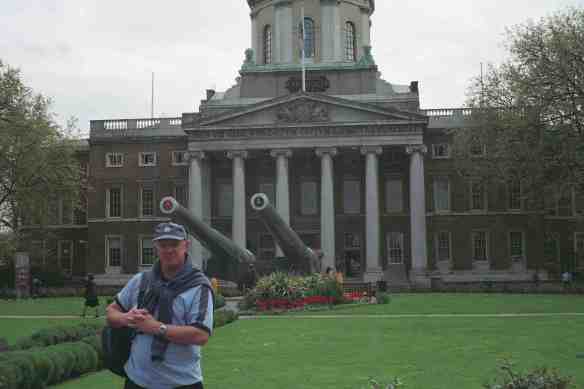 The IWM is in a large and impressive building with two enormous 15 inch naval guns out the front. It has comprehensive exhibits organised into logical periods (e.g. 1914-18). The displays tend to be of uniforms, weapons and small gear, supported by audio recordings and audio-visial presentations on demand. It also had a World War One trench experience display that was larger and more impressive than that at the British Army Museum. Lots of school groups visiting, and lots of foreign visitors (with French being very commonly heard).

All in all it is very good, but somehow I feel a little disappointed. My honest expectation was that it would be larger and more impressive than the Australian War Memorial (AWM), and it simply isn’t. I can never go to the AWM without it being an absorbing and emotionally engaging experience, and I didn’t find that at the IWM.

Maybe it’s because the AWM is built around the tomb of the unknown soldier within an almost temple like structure. Maybe it’s the speech on display from that tomb’s dedication ceremony: in my view one of the great speeches of the world, up there with Gettysburg and some of Kennedy’s efforts. Maybe it’s because it has a greater variety of displays and greater imagination in how they are displayed. Maybe its because the place was specifically designed to give relatives an understanding of the personal experience of people engaged in war. Maybe it’s because I relate more easily to the Australian war experience or that the names of some of my relatives are inscribed on the memorial. And yet I don’t think so – on the tube I couldn’t help thinking how the stations had once been used as air raid shelters and that easily evoked quite an amount of emotion in me.

On the way back I got off at Piccadilly Circus. Yeah, it’s a famous spot; statue of Eros and all that; but, once you’ve seen it, that’s about it. Don’t get me wrong, London is a very great and vibrant city; but its seems big, chaotic, impersonal and grey. While the main stone buildings are impressive from a distance, they are quite cold looking and heavily weathered, not at all a good patina, when viewed up close.