Today I leave Ireland. Overall impressions are very positive. I came here with very high expectations of the people and the countryside; and both consistently exceeded those expectations. It’s a happy, prosperous country that makes you instantly feel at home. It’s Australia (at least its more fertile bits) on a cold day, in a good year, without as much bullshit.

The big surprise was Dublin. I was expecting something of a glorified slum with people crankier than out in the country. What I got was a bright, vibrant and friendly capital; obviously honest and proud about its past, comfortable with its present and fairly confident about its future. There are exceptions are course. I saw an old ‘paddy’ wandering the streets looking a bit bewildered by it all. Perhaps the pace of change has been too much for some. I suspect much of the prosperity is from Euros flowing into the place and I wonder if that will last. Perhaps the old fella knows that Ireland has seen boom and bust before, and thinks it might all be too good to last. Whatever is true, Ireland is a place I would move to, live in and die in, in a second.

Goodbye to Dun Laoghaire and Ireland in general

I set off from the hotel for the short walk to the ferry terminal, just on the other side of the railway station. Like Rosslare, it’s more like an airport terminal than a ferry wharf. The passengers waiting appear to be a mix of Irish and Scousers. You can tell the latter easily; apart from the accent, they’re talking at about 40dBA louder than anyone else. There’s a group of about 8 to 10 of them; all female, middle-aged, and laughing and chatting incessantly. You can hear them all over the terminal, if not all over the town.

Boarded the ferry, the Stena Explorer. It is a HSS (high speed ship) that does the crossing to Holyhead in Wales in just 99 minutes. It is huge; in fact, it’s of a class that are the largest catamarans in the world and is powered by four large gas turbine engines. Looks about 20,000 tonnes and must be about 120 metres long and 40 metres wide. Has separate lounges for ‘plus’ passengers and truckies. It takes semi-trailers and buses on board. The people in the latter come aboard on the bus rather than on foot. Few rituals are involved in embarkation as travel between Ireland and the UK is classed as ‘domestic’. 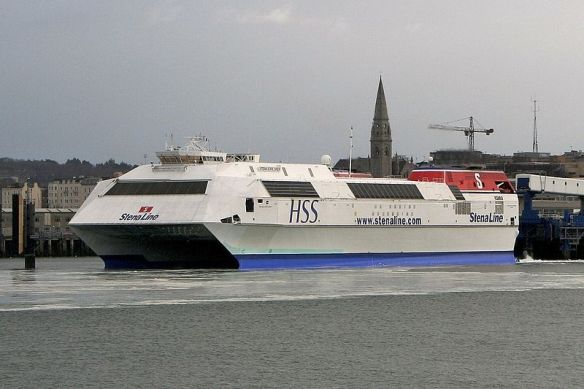 The main passenger area includes a large bar and a Burger King outlet. Lots of cafe style seats and tables. Has aircraft style emergency exit chutes and rafts. The emergency signal is seven or more short blasts, followed by one long blast on the horn (or so it says in the emergency procedures pamphlet). It is a very stable and smooth ride with almost no discernible pitch or roll. As we approached Holyhead and while I was in the loo, I though it was yawing, but it was turning hard to dock rearwards. 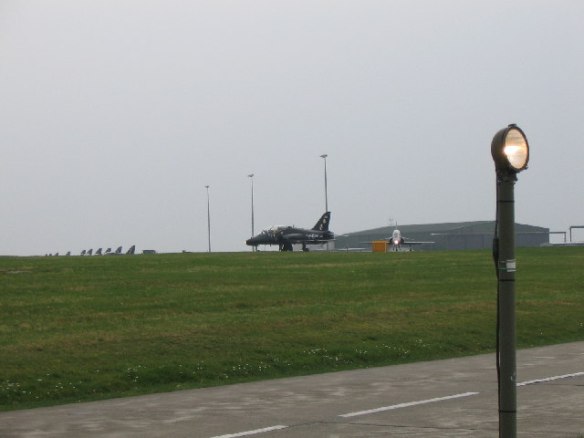 Almost missed the train out of Holyhead. The platform indications were a bit ambiguous, but another group had the same problem, so I just followed them. I’m back in Wales on a very modern DMU. I’ll need to change at Chester later to get a local Merseyrail service into Liverpool itself. The Welsh countryside near Holyhead on the island of Anglesea is very pretty and much like Ireland. Just out of Holyhead we pass a large military airfield (RAF Valley, a fast jet trainer and helicopter base). There are big mountains on the horizon from front to left, which I suspect are the mountains of Snowdonia.

Brittania Bridge over the Menai Strait – (public domain, via wikipedia)

We cross over the Menai Strait to the ‘mainland’ from Anglesea on a rail bridge suspended under the road bridge near Bangor. And yes, the waterway we cross does have a passing resemblance to those near the suburbs of Bangor and Menai in Sydney. The train then heads to Llandudno Junction, running between the sea and high steep hills. It’s difficult to capture on a still photo but would make a good video sequence. As we approach Llandudno Station we pass Conwy Castle and seem to tunnel through the edge of its walls.

The train then runs up a developed but still pretty valley. The houses of North Wales look better kept than those of the south, or those in England. Next stop is Colwyn Bay, a cute little town set on a wide beachy bay. We then pass through Prestatyn and on to Chester. Just outside Chester there is a large airfield with huge Airbus production hangars.

Arrived in Chester and after a short wait changed onto a Merseyrail train. Oh, my god; it’s full of scousers, so the tone drops significantly. Heading towards Liverpool the suburbs look better than I expected for the ‘north of England’. But then we’re still in Cheshire, which apparently is fairly affluent (I guess that’s why Cheshire cats smile so much). There are typical English semi-detached and bungalow houses, but somewhat neater than in London. For the ‘gunzels’ (or ‘gricers’ in the UK), the train is a 4 car EMU operating on a third rail system. The train goes underground as it approaches the Mersey River. Found out later it was the first railway in the world to go ‘underwater’ back in the 1880s. 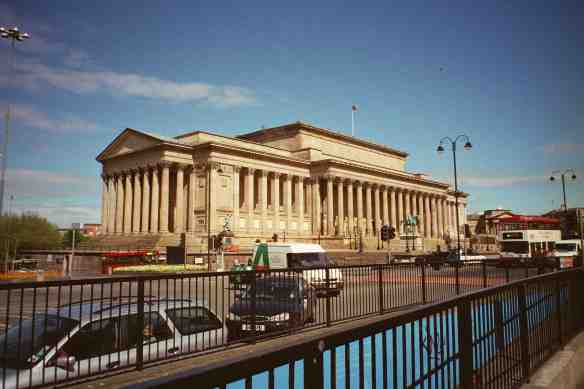 A first impression of Liverpool after arriving at Lime Street Station

Merseyrail stations are very neat and seem cleaner than their London Tube equivalents. Funny how I feel much more excited about crossing the Mersey than the Thames. It’s a name with many happy associations with my adolescence; the sixties, the Beatles, Jerry and the Pacemakers, Cilla Black and all that. I get out at Lime Street underground station and am confronted by some surprisingly impressive buildings as I come to the surface. I head up the Mt Pleasant Rd about half a kilometre searching for accommodation and book in at a mid-range hotel called ‘Feathers’.