Arrived at Heathrow at about 0500. Very quick through immigration and no Customs check. Caught the free Heathrow Express transfer to terminal 5. Too early to book in the bag, so had a coffee and waited until about 7.30 (flight is at 10.30).

Caught British Airways flight to Hamburg in seat 21C next to an outrageously good looking girl and her (probably high level English football player) boyfriend. Had a beautiful set of tanned legs draped around him for most of the flight. Grrrr!

Hamburg Airport is new and slick. A quick and very welcoming Immigration check, then off to get changed and catch the S1 to the Hauptbahnhof. The S1 is only operating to Ohlsdorf (one station away), then it’s bustitution or catch the U1 to the city. I decide on the latter and, while en-route, discover I no longer have my mobile phone. Certainly had it on the flight and just after disembarking. Suspect I may have dropped it while changing clothes in the loo. 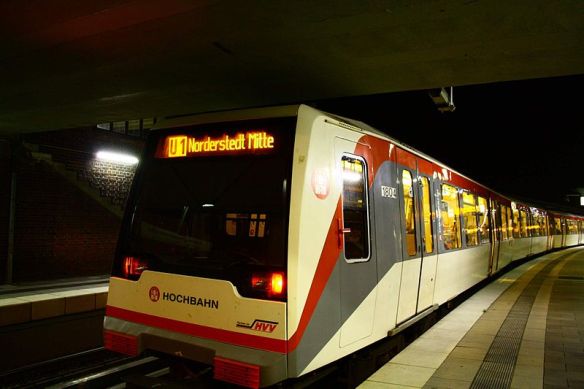 A Hochbahn train on the U 1 line (Photo: DennisHH)

Booked into the Hotel Village again; this time on the 4th floor, so quite a climb with the bags. Went shopping at Karstadt, but can’t find Pierre Cardin jeans like I bought last time, but bought another light Jack Wolfskin jacket. Went back to the Airport to see if my phone had been found, but no luck.

I must look like a local to everybody. People keep asking me for directions. First a pair of Italian girls at the airport wanted to know how to operate the ticket machine; and then an old lady, followed by a middle aged gent, asked directions. Funniest was an Aussie at Hamburg Hbf who saw some Japanese food I was eating and wanted to know which number dish it was. Conversed with me in halting German and finished with a ‘Vielen Dank!” to which I replied “No worries, mate”. Big smile followed with a “Oh, you bastard”.