Not sure where I’ll go to next, and I’m trying to avoid over-planning, or much planning at all for that matter. If the weather is really clear I might redo yesterday’s trip to Interlaken and then go on to Basel and maybe Koln. The riskier option (and therefore probably more fun) is to go to Zurich and try to find connections to Singen and then along the northern shore of Lake Konstanz (Constance) and then up to Munchen (Munich). I’m not sure what some of those services are like, as my Eurail timetable doesn’t cover minor local lines, like Singen to Konstanz. As it happens there’s an inter-regional train to Zurich leaving shortly at 0810 which connects with a service to Singen.

Heading back to Germany near the Rhein Falls

I used to think that Americans were the noisiest tourists, but I’m increasingly of the belief that the award should go to the Chinese. There’s a group of about eight of them waiting for the train in Luzern who speak really loudly and incessantly in Mandarin. They’re obviously doing it just to be a bit notorious; it’s certainly way above the volume level needed for any normal conversation. 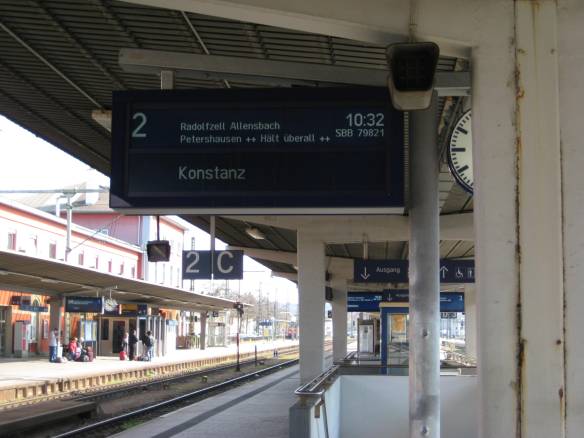 Waiting for the train at Singen

The trip to Zurich was uneventful. Caught the 0910 Stuttgart service from there and changed at Singen for a local train to Konstanz. Oh dear, a 20 minute wait for the 1032 service; the longest I’ve had for any train in Germany or Switzerland! 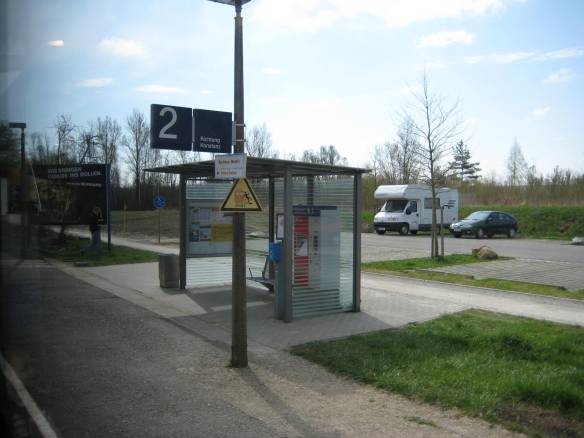 One of the tiny stations on the line to Konstanz

The train to Konstanz is an SBB four car EMU of a design that blurs the difference between light and heavy rail. It goes quite fast even though it’s an all stops train. Runs mostly on the edge of the lake with stops at villages and caravan parks, but there’s also lots of industry, especially at the last three suburban stops into Konstanz. The line is mainly single track with passing loops at stations and the timing of several passing trains is impressive.

Konstanz itself has an odd feeling about it. It looks sort of like a seaside resort, but Lake Konstanz is a (fairly) high altitude freshwater lake on the upper Rhein. It’s an old town right on the Swiss border. The Council of Konstanz was held here in 1414-18 to sort out multiple claimants to the papacy and some other issues. At the lake’s harbour entrance is a huge statue of the statuesque (certainly very leggy and busty) courtesan Imperia who was reputed to have entertained members of that Council. As good as the story is, however, it’s probably apocryphal.

I bought a ticket for a catamaran trip leaving in about 45 minutes to Friedrichshafen, a town to the east a fair way up the lake, at 1202. The sunlight here is very odd. It’s intense and makes my transition lenses go very dark indeed, yet somehow it has a strange dull quality about it as well. The weather is quite cool with a gentle breeze blowing.

Looking out across Lake Konstanz from the harbour

The ferry trip across the lake to Friedrichshafen is very pleasant and lasts a bit under an hour, just long enough to become acquainted with the sometimes baffling southern German accents of the crew. Friedrichshafen is famous as the place where the Zeppelin airships were built before being test flown over the lake. On arrival I went to the Zeppelin Museum. It’s small but very interesting. The intricate metal work in them in particular is amazingly complex, and the mockups of the interior are really fascinating.

The intricately fabricated nose tip of a zeppelin

Sleeping berths in the zeppelin mock-up

The lounge area in the zeppelin mock-up

Walked to the Stadt Bahnhof, which has five platforms and, for the first time, the lines have no overhead wire system. It’s about a 20 minute wait for my train. While waiting I sense an aircraft nearby with a sound I’ve never heard before. It’s certainly has more than one motor and it’s a piston-engined sound, but they’re obviously high-powered and with an over-riding whine, perhaps produced by turbo-superchargers. Suddenly I notice a small shape moving fast against the clouds a few kilometres away. Another guy waiting next to me immediately trains binoculars on it. ‘Was ist das?’ I ask. ‘An Amerikaner P-38’ he replies, which it most certainly was.

The train arrives for a departure at 1329. Quite a few people got off and with the noticeable level of aircraft activity around there must be an airshow on nearby. Headed off to Lindau near the eastern end of the lake on a local train and after a short wait caught the 1512 to Munich. It was fairly packed although it might have had a few more places if people hadn’t placed bags on adjacent seats.

Waiting at Lindau – No, that’s not my train, just a local S-Bahn

I couldn’t find an unbooked seat so went to the back of the train and sat on my trolley bag for the whole journey, which gave me a great view out the back window as the (mostly) single-track line spun away behind us at about 180-200 kph most of the way. The header photo of this blogsite was taken out of that window. It’s typical of the rolling, green Bavarian countryside; simply gorgeous.

I chatted with the operator of the train’s trolley service. He had a hunt around for a seat for me while he did his rounds, but couldn’t spot one either. He said the problem was because the line is only electrified from Zürich to Lindau, but once past there two diesels must be used, and they don’t have sufficient power to haul as long a train at the required speed as the electric locos. That, plus it’s a Sunday with lots of people returning home and, as they’re in the know, they book seats.

Got into Munich and booked into a hotel right near the Hauptbahnhof. It’s a family run place and (what I assume is) the daughter has excellent English and is almost as helpful as the staff in Luzern. I book in for three nights but later extend that to four. Munich is like Sydney in that it’s a place you could explore for months, if not years.

Night falls and it’s quite cold out. As usual I seem to be in the red light district, but it’s somewhat classier than Frankfurt’s. A few strip clubs and sex shops are scattered here and there, but no street workers are obvious. I’ve noticed a few such places are part of the Beate Uhse chain, and that there is a ‘naughty’ TV channel of the same name. Some searching later revealed that Beate was an aerobatic display pilot in the 1930s and a military transport pilot during WW2. She also cajoled her way into flying Me-109s, FW-190s and Me-262s, and was occasionally attacked by allied aircraft while she was doing it.

A Breate Uhse Store – a company with quite a backstory (Photo: Public Domain)

Beate apparently had a quite liberal upbringing with parents who ensured she knew the ‘facts of life’. Being ex-Luftwaffe, she wasn’t allowed fly after 1945 and needed to find another source of income. She noticed the rampant problems of unwanted pregnancy and sexually transmitted diseases in the post war period and began producing and distributing pamphlets on sexual hygiene and associated products. She started the world’s first ‘sex shops’ and, in spite of extensive official opposition (i.e. around 2000 attempts to stop her), her business grew and is today listed on the stock exchange. She died in 2001, but not before taking up diving as a hobby at age 75. I’d have to say I’m impressed!