Off to Berlin Hauptbahnhof for the last time on this trip and caught the 1116 to Hamburg. I had booked a seat earlier in case of volcanic crowding in second class, but by now the crowding is no longer an issue and there are lots of spare seats. Second class is fine although my particular seat doesn’t have as good a view as usual. Proceeding slowly out through the Berlin suburbs (only 140 km/h) we reach Spandau by 1124 (much faster than on the S-Bahn earlier) The speed then picks up to about to about 230 km/h.

A cold, wet and miserable day

Most of the countryside is flat. We pass a little grass airstrip on our left with a Cessna 172 touching down parallel to us as we speed past.  Arrived on time in Hamburg Hauptbahnhof, another very large station. It’s a rainy, cold and miserable day. The train goes on to Altona, a bit further on but still in Hamburg; it being another German locale after which an Australian suburb is named. 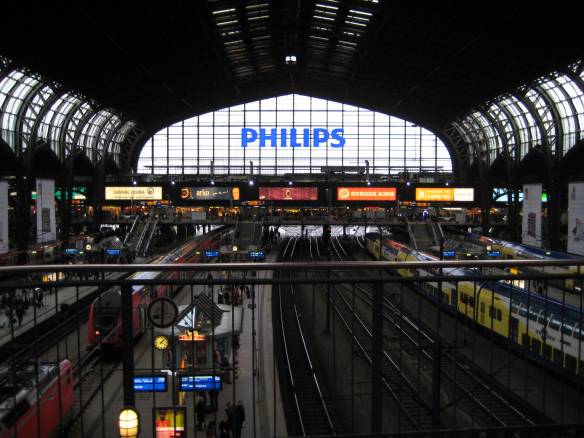 Walked to the Village Hotel in St Georg, which is very close to the station. An interesting place starting on the first floor and upwards. It was once a bordello and the place retains and trades on that sort of decor. My room has gold embossed red walls with a red ceiling and dark blue velvet curtains.  Like most mid-range German hotels it has a breakfast room and tea, coffee and drinks available in the common area whenever you want them. 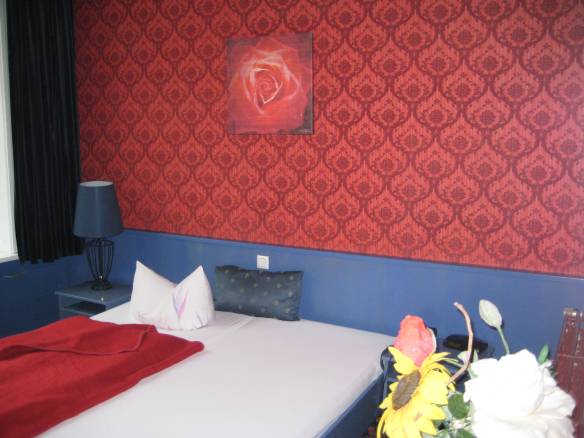 My absolutely fabulous room in Hamburg

The area around the station is a semi-red light area. Girls working the streets are fairly subtle and moderately ‘mature’, and there are a few sex shops. Oddly enough, unlike most German cities to date, there are plenty of stores selling fruit and vegetable; yay!. 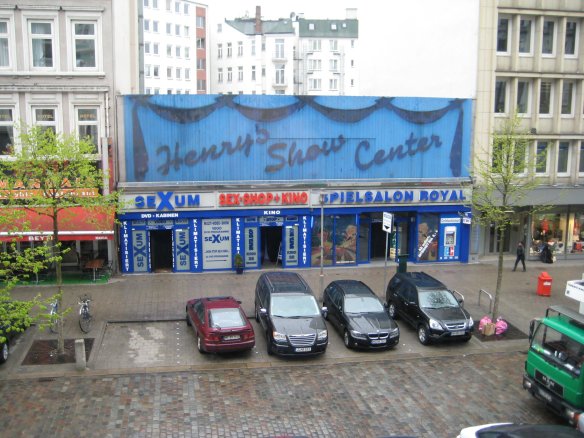 The view from my hotel room

What can I say about Hamburg?  If Munich is driven by culture and Berlin by ideas, then Hamburg is driven by industry and trade. It looks less ‘organised’ and just a little skanky in places. However there are some bits on the Alster Lakes nearby that remind me a lot of western Sydney Harbour inlets like Hen and Chicken Bay, or Canada Bay.

Then there’s the Reeperbahn, Germany’s biggest sex-mart and where the Beatles learned about life. Went there at about 0930 to 1000 PM, expecting it to be busy but it wasn’t. It was a cold night though, with a bit of rain and a major soccer match on, but there’s only hundreds, not thousands of people there. It seems less grotty than King’s Cross, though much larger, with the road being about three times wider. Was wearing my new Jack Wolfskin jacket I bought in Berlin; and wow, does it work well. It breathes nicely but is warm, and the sleety, drizzly rain just runs off it. Didn’t get the slightest bit wet.

The Reeperbahn in St Pauli in Hamburg

One side has mostly peep shows, video shows and lap dancing. I didn’t go into the latter as they have a bad reputation for very expensive mandatory drinks. The other side has more restaurants and general shows, plus a large police station. Most of the street workers seem to operate from the side street opposite the police station. They appear to have rooms available nearby and there are dozens of them. For some reason most face the wall, a few metres apart, chat to each other and look over their shoulders. There are no pimps apparent. As a single older male, I’m a ‘prime target’ and it takes only a one hundredth of a second glance at them to make me into a potential customer. 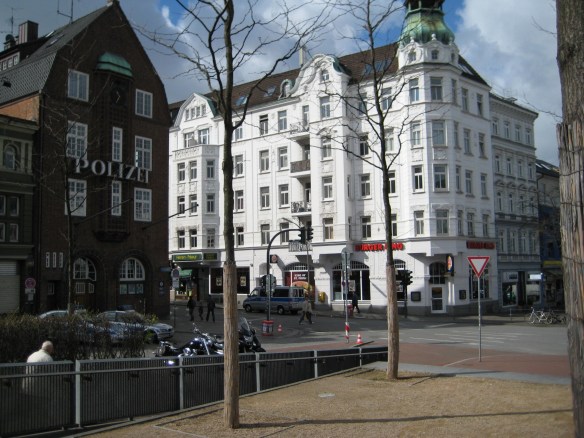 The Police station in the Reeperbahn area

I’d have to say though, they are very well spoken, persistent but not annoying, mostly exceptionally pretty and average around 20 to 25 years old. The easiest way of putting off is to say ‘I’ve already been done, thanks’. They all seem to understand English. The German sex industry appears to operate on a quite different basis from that in Australia. The former seems to aim a quick single hit (probably because it’s a port/tourist city, while the latter goes a bit more for repeat business. A sort of ‘wham bam thank you Sam’ approach as opposed to the ‘girlfriend experience’. (Or, so I’m told.)