Hotel staff are OK, but not as well trained as could be expected. Breakfast staff consist of an interesting mix – one Jamaican, a Spaniard, an Asian (not further described) and one Hong Kong Chinese (I think). The latter is in charge and rules with an iron rod. I’ve discovered I can ‘innocently’ cause havoc by subverting her authority. Favourite tricks are waiting just outside until she’s occupied before entering the dining room and cajoling one of her underlings to seat me instead of waiting for her. Makes them very nervous, and her very anxious to get back to ‘her’ job. Even better is sneaking in and signing off the breakfast sheet before she notices.

Off to the RAF Museum today at Hendon (nearest station is Colindale on the Northern Line). It’s Saturday and (Oh my god!) I have to wait a whole four minutes for a train! Took the Circle Line eastbound to Euston Square, then walked about 400 metres to Euston, which is both a mainline terminus station and a tube station on the Northern Line. Got the tube from Euston to Colindale. It surfaces at Golder’s Green, about two thirds of the way there. Euston terminus was very busy (first day of a long weekend) with a heavy Police presence (at least 20 in uniform in the station).

Once the tube is running on the surface you can see more suburbs. They’re dominated by large blocks of apartments and large multi-storey houses. All look very drab and grim – dark bricks, dilapidated window frames and steep slate roofs. While trains and stations are clean there is a lot of graffiti on adjacent property. Colindale seems like a fairly ordinary suburb. The station entrance is literally a shop front.

Signs point to turn left for the RAF Museum and I head up the road through a roundabout for about a kilometre. Houses are very ordinary, but closer to the museum there are more affluent estates on the left and accommodation blocks for Middlesex University on the right. At the roundabout I couldn’t help noticing a poster on a pole advertising ‘free cat neutering’ – there’s probably a story behind that, but I guess I’ll never know.

A Hawker Hurricane outside the RAF Museum

The RAF Museum is in some large hangar buildings (I assume part of the old Hendon Aerodrome) with modern facades. Out the front is a Spitfire and Hurricane on poles and two Air-Sea Rescue launches.  I headed for the entrance, which is in a newish hangar.

The exhibits start with a history of aviation – a very good ultra wide screen display using a series of dynamic collages of still shots and movie clips of early military and civil aviation, helicopters and space exploration. It’s a very pacy, engaging and effective demonstration. This area opens out into the main part of the hangar with some classic aircraft – Mustang, Spitfire, Tempest, Mosquito, Me-262, and so on. All exceptionally well displayed. The whole place is very impressive and there is much more to come.

An audio-visual display on a Dambuster’s theme is just inside the entrance to the next hangar. This leads into two further hangars with a mind-blowing assortment of aircraft, such as the Valiant, Vulcan, Lancaster, B-17, Phantom, Buccaneer, Hudson, Sabre, Hart, Hunter, Beaufighter, Canberra, Belvedere and many, many more – again all very well displayed.

Even the older hangars themselves are a feature. They’re grand old structures with iron columns and heavy timber lattice roof spars. Big white panels that are mounted high up along walls had me puzzled for a minute, but they proved to be huge, hot water fed heating panels. A good little shop attached to the museum sells a wide assortment of models, books, videos and so on.

Across what was probably once a parade ground is a separate hangar; and here was the best surprise. Just as I got in the door, one of the staff hustled me into the ‘Our Finest Hour’ presentation. I was led through a now darkened hangar to a little grandstand seating about 20 or 30 other people.

Obviously the presentation was about the Battle of Britain, but how it was done was quite brilliant. In front of the grandstand was a transparent screen, and behind it was a white barrage balloon forming a second screen. Nearby in the hangar were arranged both British (Spitfire and Hurricane) and German (Me-109, He111, Me-110 and Ju-88) aircraft. On the far side of the hangar, about half way up the wall, was a large shadow diorama of the London skyline. As the presentation plays, it uses projected stills and movies on to both screens. At appropriate moments, the British and German aircraft are illuminated. During the blitz sequence, the diorama of the London skyline appears to be on fire. Everything was tightly scripted and factual, but also very emotionally engaging – barely a dry eye left in the house by its conclusion. Why the hell isn’t the Imperial War Museum more like this?

A Messerschmitt Me-110 Night Fighter

After the presentation, the lights are brought up and the hangar reverts to a normal display. Some interesting and unusual aircraft I haven’t seen in the flesh before. They include a Sunderland (yes, a whole one), a Fairey Battle and a Boulton Paul Defiant. The display also included an RAF ready room, an Observer Corps station, a radar operator station and various volunteer services from the blitz. The latter included the Auxiliary Fire Service with an AFS truck. A full scale diorama shows a blitz scene with a full range of characters and an audio of their banter. For an aviation enthusiast like me, the RAF Museum alone would justify a trip from Oz to London. 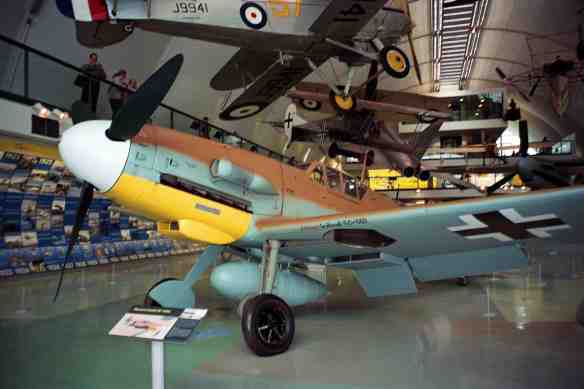 A Messerschmitt Me-109 (day) fighter

Headed back on the tube after also looking about the local area. British town planning in this area seems to leave a bit to be desired. There doesn’t seem to be any logical groupings of shops or services, and many shops are just converted terrace houses. Maybe there’s a heritage issue involved?

The demographic on the tube is different on weekends (as it also tends to be on trains in Oz). Back at Euston Square there were a group of hoons who jumped on and off the train several times as their ring leader shouted out how they were at their station, then they weren’t, then they were, etc. There were about eight or nine; all big skin-headed dropkicks and a bit intimidating to everyone else. Was on the verge of shouting at them, “You’re at Euston Square, now fuck off’, but resisted (probably wisely).

Back at Paddington things were getting busy as Saturday evening life began to hum. Tried to get the two films I’ve shot so far developed, but the shop closed at 1600, not to re-open until next Tuesday!! Must be some British concept of customer service that’s too subtle for me to comprehend.

A funny incident happened on the tube on the way home. Two yank girls got on the train and whinged endlessly about… well just about everything really; until they discovered they were on the right line but going the wrong direction. ‘Oh no, not again’ one exclaimed and they both leapt off. First time I’d ever seen passengers on a tube smile at anything.